The date of March 20 was chosen to celebrate the anniversary of the Agency for Cultural and Technical Cooperation (ACCT) that was born on March 20, 1970 in Niamey, Niger. This agency marks the first step toward Francophone cooperation, which will become the International Organization of La Francophonie a little later.  About 300 million people speak French tod 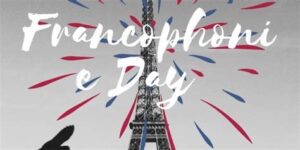 The French language has always had an important place among languages. First a symbol of culture and creativity, it was then a vector of democracy and humanism, values ​​that UNESCO intends to promote. UNESCO loves, speaks and promotes French – one of its 6 official languages ​​and one of its 2 working languages. But more broadly UNESCO celebrating the Francophonie celebrates the cultural and linguistic diversity that makes up the world.

Celebrating La Francophonie is recognizing the potential of language and culture to unite people, to create spaces of solidarity and mutual understanding, to reflect together on our common future. The United Nations Educational, Scientific and Cultural Organization (UNESCO) and the International Organization of La Francophonie (OIF) share this common vision that places culture and language at the heart of any lasting effort for peace. and development. Per UNESCO website