Why It Matters: The Belarus Protests 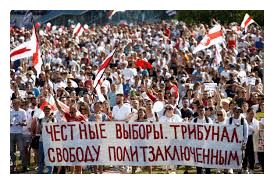 An America and the World Conversation
Free, Live and Online on Thursday, October 29 at 12:00 pm

Belarus is in the midst of unprecedented protests and demonstrations after many years of President Lukashenko’s authoritarian rule. How did the situation become so volatile? Will Russia intervene to save Lukashenko? How have women become the sustaining force behind these protests?  On the eve of our own elections, what lessons can the U.S. learn from the protests in Belarus?

Brent F. Nelsen is professor of politics and international affairs at Furman University where he has taught since 1990. He received his BA from Wheaton College (IL) and his MA and PhD from the University of Wisconsin-Madison. His teaching and scholarship focus on Europe and the European Union with an emphasis on religion and politics. His most recent book, co-authored with James L. Guth, is titled, Religion and the Struggle for European Union: Confessional Culture and the Limits of Integration. (Georgetown University Press).

David DeBatto retired from the U.S. Army in 2004 as a senior Counterintelligence (CI) Special Agent NCO, where, among other assignments, he did a tour in Iraq during Operation Iraqi Freedom in 2003-2004 as the team leader of a Tactical Human Intelligence Team (THT). During his Army career he became a subject matter expert on the military and intelligence services of the Soviet Union/Russia and the Gulf Arab states. Since retiring, David has consulted with several NGO’s on conducting legal and ethical interrogations and intelligence gathering operations. He has discussed those and other related National Security topics on every major TV and radio network in the U.S. as a guest expert. David co-authored a series of four novels for Warner Books (now the Hachette Group) under the series name: CI: Army Counterintelligence and has written articles for Salon.com, Vanity Fair, The American Prospect, The Washington Spectator and The Washington Monthly. David’s newest work in progress, www.protectingtherepublic.com, features podcasts,

blogs, and commentary on the most pressing national and international issues of the day as they relate to American National Security.  The memoir of his tour in Iraq, Mr. David, is due out in the spring of 2021 from Potomac Books.

Michał Matlak holds a PhD from the European University in Florence, works as policy advisor at the European Parliament, and is a regular contributor to the Polish magazine Liberal Culture. Former visiting fellow at the Princeton University, the Institute for Human Sciences in Vienna, and the Hertie School of Governance in Berlin.