Upstate International Clubs create connections and friendships across borders. Our clubs help expatriates and their families feel more connected to their new community, allow former US expats to reconnect with cultures they miss, and provide a warm environment for forging bonds with our diverse region. To learn details about each club navigate the tabs below.

Clubs are open—and free!—for all members of Upstate International. Membership is affordable and gives you access to all of UI’s wonderful programs and opportunities.

The International Women’s Group (IWG) is a social group and a conduit to connect women of all nationalities living in the Upstate. Membership in Upstate International entitles you to all the benefits of the IWG. Newcomers will feel at home by getting support from women already established in the area, while current friendships are expanded upon and deepened.

With a wide variety of monthly activities, from coffee mornings and potluck lunches to hiking and fitness walks, there is always an engaging experience around the corner. Special events such as International dinners and holiday celebrations provide a taste of the world. There are craft days and panel discussions with women who share a global outlook.

* IWG Tuesday Events generally are held at the Upstate International Center, starting at 10:00 AM.

Coffee and Conversation @ Panera: 3rd Tuesday of the month, 10:00am

Stride and Stroll: 1st Thursday of the month, 9:00am- Zoo Parking Lot at Cleveland Park

Ladies Night Out: 3rd Thursday of the month, 6:30pm. Different location each month.

Join today, and start exploring!  We occasionally meet to discuss international events, international travel and to network.  All nationalities are welcome, whether you are born and raised in SC or an expat from far away, having an interest in the world around us is all that we ask.

Jónas Ebeneser leaves his home in Iceland for a city thousands of miles away pummeled by war and violence, now at tentative peace. He brings with him only his toolbox, scars, and grief. While he plans his suicide, the people of the town draw him out with their endless list of broken items to be fixed. With humor and simple, heart-piercing prose, Hotel Silence tells the story of a man and his past and the community where he finds himself. Ólafsdóttir’s world is full of surprise, sadness, love, and transformation. I didn’t want it to end.

Communism had failed to deliver the promised utopia. One’s “biography”―class status and other associations long in the past―put strict boundaries around one’s individual future. When Lea’s parents spoke of relatives going to “university” or “graduating,” they were speaking of grave secrets Lea struggled to unveil. And when the early ’90s saw Albania and other Balkan countries exuberantly begin a transition to the “free market,” Western ideals of freedom delivered chaos: a dystopia of pyramid schemes, organized crime, and sex trafficking.

October 24, 2022
I Will Die in a Foreign Land
By Kalani Pickhart

I Will Die in a Foreign Land follows four individuals over the course of a volatile Ukrainian winter, as their lives are forever changed by the Euromaidan protests. Katya is a Ukrainian-American doctor stationed at a makeshift medical clinic in  St. Michael’s Monastery; Misha is an engineer originally from Pripyat, who has lived in Kyiv since his wife’s death; Slava is a fiery young activist whose past hardships steel her determination in the face of persecution; and Aleksandr Ivanovich, a former KGB agent, who climbs atop a burned-out police bus at Independence Square and plays the piano.

Anna is at a stage of her life when she’s beginning to wonder who she really is. She has separated from her husband, her daughter is all grown up, and her mother – the only parent who raised her – is dead. Searching through her mother’s belongings one day, Anna finds clues about the African father she never knew. His student diaries chronicle his involvement in radical politics in 1970s London. Anna discovers that he eventually became the president – some would say, dictator – of a small nation in West Africa. And he is still alive…

A lively, sexy, and thought-provoking East-meets-West story about community, friendship, and women’s lives at all ages—a spicy and alluring mix of Together Tea and Calendar Girls.

A gripping nonfiction thriller, The Confidence Men is the story of one of the only known con games played for a good cause – and of a profound but unlikely friendship. Had it not been for “the Great War”, Jones, the Oxford-educated son of a British lord, and Hill, a mechanic on an Australian sheep ranch, would never have met. But in pain, loneliness, hunger, and isolation, they formed a powerful emotional and intellectual alliance that saved both of their lives.

March 27, 2023
The Seven Culinary Wonders of the World: A History of Honey, Salt, Chile, Pork, Rice, Cacao, and Tomato
By Jenny Linford

Linford focuses on seven ubiquitous ingredients often taken for granted: honey, salt, chile, pork, rice, cacao, and tomato. Her book tells their fascinating histories and helps foster a new appreciation for them, relating some of their first recorded uses and how the ingredients spread worldwide through exploration and trade routes. The author shows how human ingenuity transformed them from expensive, exotic luxuries into affordable staples. The inclusion of folklore, facts of cultural and religious significance, and novel illustrations make the book both informative and pleasurable. Though over 60 easy recipes from a range of countries are included, the book’s real value is the entertaining history lesson. Linford’s idea is original and well-executed, making this a perfect read for a curious food lover who wants to know just a bit more but who would be overwhelmed by tomes devoted to a single ingredient.

April 24, 2023
Everyone Knows Your Mother is a Witch
By Rivka Galchen

At the age of 70 in 1615, Katharina Kepler, an illiterate, cantankerous widow, was put on trial for witchcraft. As an herbalist, she was aware she was walking a fine line between life and death for those who came to her for cures. Like the plants she picked throughout the Leonberg countryside, she was capable of good or evil. For those she helped, Frau Kepler was a healer, for those who died or lost family members, she was a witch. The latter wanted to put her on trial and to death for consorting with the devil. 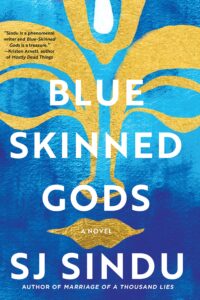 In Tamil Nadu, India, a boy is born with blue skin. His father sets up an ashram, and the family makes a living off the pilgrims who seek the child’s blessings and miracles, believing young Kalki to be the tenth human incarnation of the Hindu god Vishnu. In Kalki’s tenth year, he is confronted with three trials that will test his power and prove his divine status and, his father tells him, spread his fame worldwide. While he seems to pass them, Kalki begins to question his divinity.

The International Book Club features books by international authors that will take you into worlds and lives around the globe. We delve into mysteries, novels, and folklore influenced by traditions old and new, varied societies, and passions of creative individuals.Through facilitated discussions we share a love of reading and learn about diverse cultures. We interpret perspectives and reveal parables. Most of all, we have fun.

The Book Club gathers once per month from 7:00pm to 9:00pm on Mondays, August through June. Meeting locations are currently to be determined. Light meals, snacks and beverages may be purchased during meetings. For more information, email us! ([email protected])  And be sure to sign up for our weekly eBlast to be notified of any changes in the schedule and meeting location.

Come Speak With Us!

Want to improve your Spanish or English skills? Do you like making friends and having fun? Then come visit our Spanish or English Conversation Clubs at Upstate International! Our Conversation Clubs offer an opportunity for speakers from different cultures to come together, practice the spoken language, and gain confidence in discussing different subjects. It is an excellent way to build language proficiency, as well as social and communication skills.

Led by native speakers, each club emphasizes conversation rather than instruction. Conversation Clubs are open and free of cost for all UI members who want to enhance their conversation skills. No registration is required. Just show up and join the conversation!

Still not a member? Feel free to visit a class once before pursuing UI membership. After you’re a member, you may drop in whenever you like! If you have further questions, email us.

* Upstate International follows the Greenville County schools’ schedule and is closed when the Greenville public schools are closed, including school holidays and school weather closings.

If you are a Retired or Semi-retired Expat living in the Upstate, we want to meet you (members, spouses and significant others) and have you join us. Come and connect with fellow expats to share conversations about your experiences and travels.

For December only we are moving the luncheon to Friday, December 9, to avoid a conflict with the German gluhwein party.
The luncheon will be held at Pomegranate restaurant on South Main St at 12 noon. Please RSVP to [email protected]
Beginning in January, 2023, the luncheons will again be on the first Friday of each month. We plan to explore different restaurants in Greenville.

Sign up for weekly eBlast to be notified of any cancellations or other changes in the schedule.