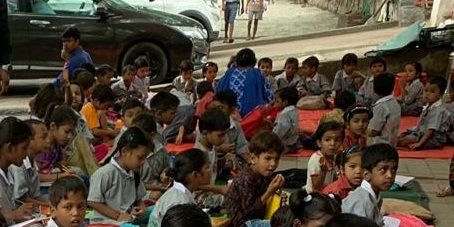 It was my third time in India. I knew the drill of security checks at Indian airports. I knew to use bottled water for brushing my teeth, to be extra diligent with washing my hands, to not eat anything raw or anything I didn’t peel myself. I knew to be careful with physical contact between men and women, how to dress appropriately. I was prepared for the many hours spent slowly moving through crazy traffic, with cars, scooters packed with whole families of 5- no one wearing helmets and with no apparent age limit or minimum. I knew the humidity, young children knocking on the windows asking for money when our car was stopped. 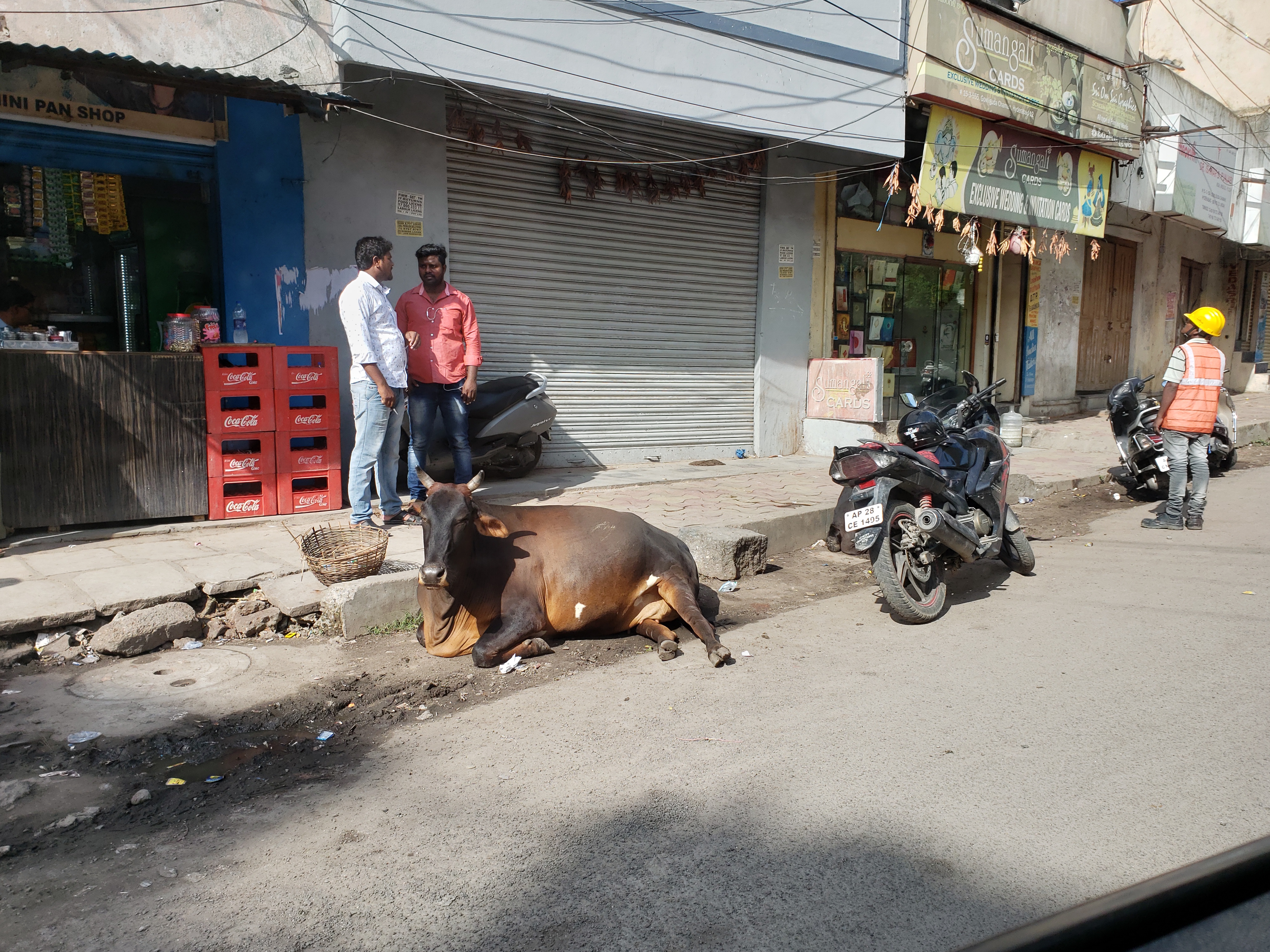 But when a country is made up of almost 1.4 billion people- will you ever go there and not learn or see something new? Sometimes you learn without even noticing, but other times, you learn something you will never forget.

I was driving to a trade center to set up our booth for a trade show in Delhi, staring out the window, watching the people, the landscape. Cows on the roads were nothing special; neither were unfinished roads, sometimes trash, or huts and sheds that people called home standing by the side of big, busy, and dusty roads. 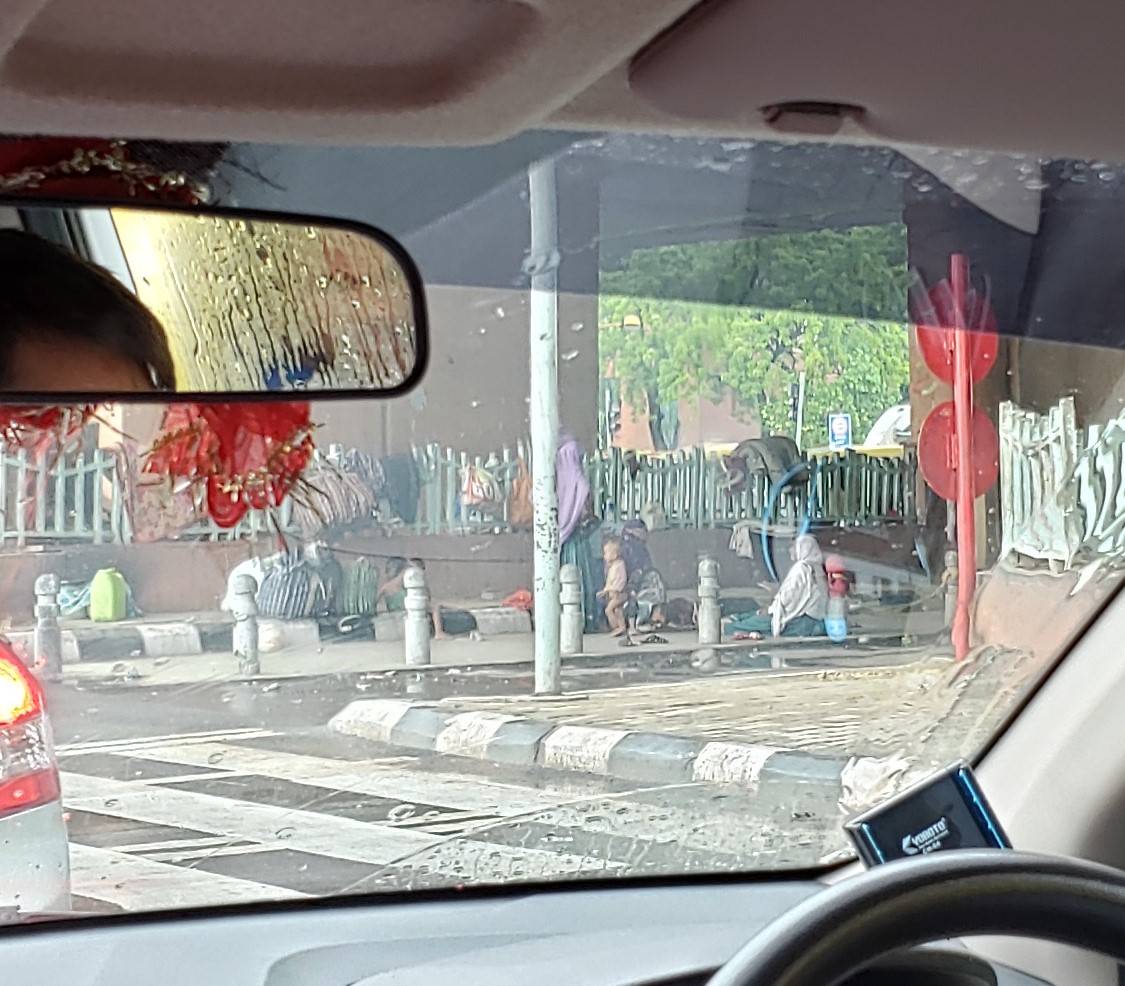 When I was stopped at a traffic light, I saw a little boy who couldn’t have been more than a year-and-a-half old. He was walking already but in that cute wobbly way where it was obvious he had just learned recently. He was adorable and his siblings bounced around him and played with him. It was a happy scene.

But that’s not what struck my heart. What struck me wasn’t that he wobbled around without any pants on or that he wasn’t even wearing a diaper. Instead- I realized that his family lived there. Under an overpass, living on the sidewalk/shoulder in a makeshift hut on the hard paved ground next to a busy road with Indian traffic. In their childish innocence and purity, he and his siblings still simply played where it was normal to them.

Raising children is hard work, but how do you manage all of that when you live on the street, when you don’t have a separate bedroom for your child, when you don’t even have diapers, running water and soap to wash your hands, pacifiers, clean and soft blankets; instead you deal with mosquitoes that carry a slew of diseases, including malaria, dengue fever, Zika, chikungunya, and even encephalitis? Dirt and dust from the exhausts of the cars and scooters driving by. Rainy and monsoon seasons. Let’s not even get into all the animals that could bite you.

How do you teach a child to crawl when he can accidentally bang his head on the hard pavement? How do you keep him clean when he poops or pees all over you?

Apparently, somehow you just do it.

Although a lot of people don’t like being stuck in traffic, when I’m traveling for work, it never bothers me. Quite the opposite- it gives me time to people-watch in a more authentic setting than at a trade show, where everyone is behaving in a professional manner. You see smiling and laughing faces, sometimes it looks like men are bartering or negotiating the price at the street markets, doing their famous Indian head-bobble. You see what they wear, how they walk, you see their faces.

When you watch people you learn about them. It’s said that 93% of everything we say is communicated non-verbally. Our body language, facial expression, tones of voice, etc. So when you pay attention, you can see what people are saying.

At first, you might not pay attention to their faces and body language. You might just see the roads, the buildings. You might only notice the things that are most different from you and all that you don’t understand. But if you stop for a second, you will begin to see the similarities, too.

The gentleness between a mother and her baby, boys playing tag, men laughing.

To say that the world is becoming more and more similar seems untrue  to me. While  there are many similarities that all humans share, including the  basic emotions of anger, disgust, fear, happiness, sadness, and surprise, as well as  the basic human needs of physiological, safety, love and belonging, esteem, and self-actualization, we are still very different. Of course, we are all trying to find solutions  to the universal problems facing all of humanity: hunger, shelter, weather, security, etc. But aren’t the parts that are different about other people, their languages, cultures, foods, clothing, and behavior the aspects that make traveling fun?  To vacate your own life and ways-of-doing in order to travel, explore, and discover how other people find solutions to the same obstacles in life, is a gift.  Sure, it might result in a bad case of “Delhi Belly” (India’s version of Montezuma’s revenge), but if the food really was that delicious- wasn’t it worth it?

When it comes to food in particular, in my opinion it is most rewarding to be open-minded. You don’t have to like whatever you’re offered, but it’s generally best to give it a try. You might be surprised. If you are open-minded about that then the whole world is a lot less scary. Who knows- you might even enjoy blood tofu or liver dumplings?

Regardless of your level of experience, or fear, it is important to remember that it is impossible to have learned, seen, and done everything. It is also vital to see beyond the hardships that people face and the problems that exist and focus on the good that is being done and is happening  around you.

As one example, the Sunaayy Foundation, an Indian not-for-profit organization, helps underprivileged children between 3-12 years of age receive basic education for reading and writing Hindi and English, Arithmetic, as well as personal hygiene, physical education, social sciences and art and craft. The children sit on blankets on the sidewalk, under tarps to keep some of the rain away.

On my last trip to India, my colleague Rajesh and I visited the children of the Sunaayy Foundation as T&S Brass helps sponsor the organization. We thought we would get the children some snacks and, being the responsible parents we are, mostly brought healthy crackers and cereal bars. To our  amusement and chagrin some of the children were kind of grumpy about receiving something healthy instead of candy or chocolate.

It still makes me smile now because children will be children. The fact that some of those children were slightly grumpy and picky about a gift shows that the Sunaayy Foundation takes good care of them. They are given what they need so they can return to being cranky about not getting candy for dinner.

The moral of the story? You’ll never finish learning and especially kids will surprise you.