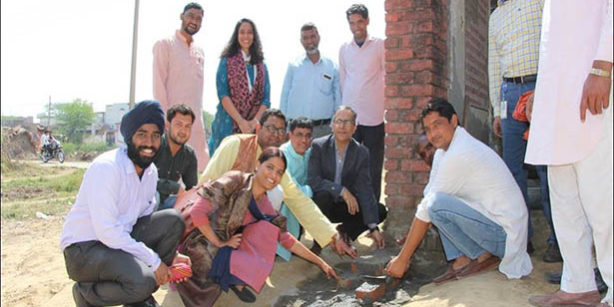 To help set up local students for success, Fluor partnered with the local non-governmental organization Sehgal Foundation to identify two government schools that were in need of renovation. Fluor employees then set to work.

Volunteers spoke with students, teachers, principals, villagers, Sehgal Foundation representatives and the sarpanchs (heads of the villages) to determine the immediate needs of the schools. They then made recommendations to Fluor’s local Community Relations committee. Fluor worked through the Sehgal Foundation to hire contractors to provide Phase I school refurbishments – the first step toward improving the quality of education for village students.

Fluor provided an extensive refurbishment at the Bukharaka Village school. A priority need was to provide separate sanitation facilities for girls and boys. Before the new facilities, students would often have to leave school premises to use the restroom. Older, primary-age girls miss significant amounts of school or are unlikely to continue at school if sanitary facilities are poor or non-existent.

Continuing to improve hygiene and water conservation efforts, Fluor developed a rainwater harvesting program and a new drinking water station to provide clean, filtered drinking water. Sanitation training sessions were also conducted with students, discussing sanitation and the Swachh Bharat Mission, which focuses on cleaning up the streets, roads and infrastructure of India’s cities, towns and rural areas. In addition, volunteers leveled the ground to prevent waterlogging during the rainy season, thus reducing water-borne diseases and absenteeism among students. Last, a perimeter gate was built to secure school grounds.

An additional school refurbishment took place at Government Middle School, Untka Village. Fluor provided renovations for 18 classrooms and the school lobby. The ground was leveled to provide a play area for students. Separate sanitation facilities were also constructed for girls and boys.

Main entrance and boundary walls were repaired to stop animals from entering school grounds. In addition, Fluor funded repairs for the roof, floors, doors, windows and classrooms, and painted throughout the school. The school kitchen was renovated with a shed to provide a safe, clean area to prepare meals. Last, training sessions were conducted with students about sanitation and the Swachh Bharat Mission.

At the Untka Village school, enrollment increased by 22 percent, and out of the 34 students that dropped out of school, 26 returned to complete their education. Attendance went from 72 percent to 91 percent for primary students and 90 percent for middle school students, and the average grade per student increased by 16 percent.

Fluor is now executing Phase II of the project and will provide new desks for students, along with restoration of an additional rain water harvesting facility.

Through these renovations, Fluor is improving the educational experience for approximately 800 students.